Whom we are looking for 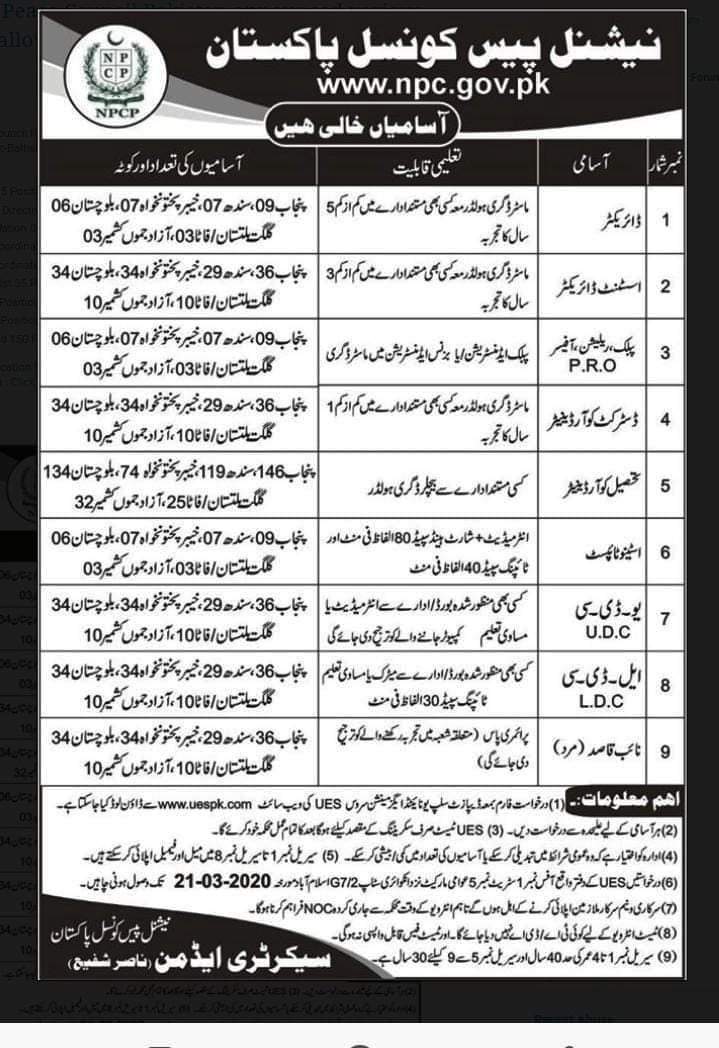 National Peace Council Jobs Opportunity (Director , Assistant Director , Public Relations officer , District Coordinator , Tehsil Coordinator ,Steno , UDC , LDC and Naib Qasid Hundreds Jobs)
Director
Assistant Director
Public Relations officer
District Coordinator
Tehsil Coordinator
Steno
UDC
LDC
Naib Qasid
How to Apply :
Apply Here
www.uespk.com
Last Date to Apply :
21-03-2020
• INTRODUCTION OF NATIONAL PEACE COUNCIL (NPC)
“Peace does not rest in the charters and covenants alone. It lies in the hearts and mind of all people. So let us not rest all our hope on parchment and paper, let us strive to build peace, a desire for peace, a willingness to work for peace in the hearts and minds of all our people.”
Our beloved homeland Pakistan currently passes through the sensitive phase. While the central and provincial governments are facing political unrest, financial crises and law & Order Situation. The menace of terrorism i.e. Suicide Bombing, Ambush, threats are spreading panic among the citizen. The evils like Sectarianism, Ethnic clashes and Religious prejudices have resulted in loss of precious human live and are breeding a sense of insecurity and uncertainty. Now it is high time to send a message to international community that neither Islam has any association with terrorism nor Pakistan is a Safe-Haven for terrorists. There is dire need to present a real face of Islam, and to prove the world that Islam is the religious of peace.
Our prophet (Peace be Upon Him) was sent as “Mercy to the world”. Even during wars Prophet (Peace be Upon Him) showed mercy to the prisoners and forbade to hurt noncombatants.
Now at this crucial stage we should stand beside our honorable central chairman National Peace Council by adopting solidarity and Harmony.
We should act in accordance with the well laid principal of Islam, using the N.P.C. platform to promote well-being and prosperity of human race.
“If we are to have peace on earth, of loyalties must transcend our race, our tribe our class and our nation, this means we must develop a world perspective.”
• AIMS AND OBJECTIVES OF NATIONAL PEACE COUNCIL (NPC)

1. Regardless of all the discrimination based on cast and creed cult, NPC aims at ensuring peace and human dignity at global level.
2. To unite all religions and school of thoughts at a common platform to serve the humankind.
3. Promotion of moral values in the society on the basis of honesty, truth, faithfulness, credibility and accomplishment of promises, which will lead to elimination of social evils such as bribery, favoritism, fraud, corruption, injustice and other menace prevailing in the roots of our society.
4. To brace and band together with law enforcing agencies for peace and wellbeing of our treasured country.
5. Each and every member of the National Peace Council will reckon himself a soldier to safeguard and shelter the new generation and national security.
6. National Peace Council will render its volunteer services during natural calamity and disasters.
7. Delegations of National Peace Council will visit different countries, and will organize seminars & conferences and will keep the media always in lube.
8. NPC will organize training sessions for peacekeepers, and will eliminate all kinds of terrorism, extremism and violence by bearing in mind the principles of interfaith harmony.
• ACHIEVEMENTS OF NATIONAL PEACE COUNCIL (NPC)
1. NPC has framed Leaderships and members at Central, Provincial, Divisional and District levels that are serving the cause of the Peace Council at their respective levels.
2. A cluster of 21 seats is made for Central, Provincial, Divisional and District levels and 11 seats for Tehsil, City and Union Council level.
3. NPC has devised wings of its organization comprising of Youth Wing, Women Wing, Lawyers Wing, Interfaith Wing, and Journalists Wings which are working tirelessly round the clock for the rectification of peace in the Country.
4. NPC has fabricated IPCIHs in oodles of countries and deputed fellows are helping Pakistan by foreign exchange earnings, which has eventually helped them to achieve good repute among their natives. They have organized seminars which improved their personalities not only among their countrymen and compatriots but among their foreign companions as well. They imparted the peace message and proved that Pakistanis are not terrorists, but and are peaceful, tranquil and solitary dwellers.
5. NPC has mushroomed spirit of peace by embracing people from all walks of life in the Peace Councils.
6. Ullemas and religious bodies from different schools of thought have been deputed on various key posts of Peace Council, which encouraged them to not only improve their identities and activities in their madrasas but in the society and community as well. This initiative lend them a helping hand them to institute and demonstrate peace in their respective eras. This effort was well appreciated by the Government of Pakistan also.
7. Sports have been nurtured through the establishment of Youth Wings in all the Cities. Key role has been portrayed by social Media which stemmed in boosting patriotism, eradication of crimes and depletion in corruption and other social evils previously observed injustice in local police stations and other institutions.
8. NPC joined hands with educational institutions to formulate competent policies for the enhancement of education, results of which would be endured at gross root level.
9. NPC have worked in different fields in order to strengthen and bolster democracy and peace and establish amity in our beloved homeland and across the globe.
10. NPC has burned the midnight oil to snub corrupt mafias and has provided a platform to raise voice with the assistance of print and Social Media and has spread awareness among slogan chanting crowds for the development of patriotism and nationalism among masses.
11. Peace Council teams with the help of Provincial officers unearthed many Corrupt Police Officials specially those Officers who were supporting terrorists.
12. Peace Council played the key role of a Bridge between public and Law enforcing Security Institutions resulting in upholding their image in the society.
13. NPC arranged debates in the Educational Institutes on the subject of Peace and thus enlightened the need for Peace among the students. (Photos on next pages).
14. To flourish Harmony among the minorities, Chairman NPCIH along with his teams attended Birthday Ceremonies of Baba Guru Nanak at Nankana Sahib since last three years, attended Christmas ceremonies with Christians and Diwali proceedings with Hindus and showed the practical picture of Interfaith Harmony with all these Minorities which resulted in better image of Pakistan within the Country as well as in Foreign Countries also.
15. A Bain ul Masalik wing was created which brought harmony between different Masaliks of the Muslims, honored them with different responsibilities in the wing, which resulted in the end of fights between them and also unearthed such elements that create this kind of situations among them. Today there is no fight between Sunnis, Shias, Doe Bandies etc. this role of the NPCIH will be written in Golden Words in the History.
16. NPC has adopted a two point agenda for the International Peace. Betterment of Humanity, uplifting their respect and Belief in One ALLAH, this will make the world peaceful and live able.
17. NPC is working hard to alleviate and uplift the society by working from grass root level in fields of Education, Health, Anti-Corruption, and Infidelity in Society and to establish a true Democratic environment in the Country....

Join us today without any hesitation

Time for a new job? Browse our popular locations and job titles. Alternatively use our quick job search links below to find local job vacancies near you. Whatever type of job you're looking for, you can find your perfect match today on PakistanJobsList.com